Last year we made our first Leprechaun Trap and the girls are even more determined to catch him this year.  Since he was able to eat his way out of the trap last year, the girls decided we needed something a bit sturdier and decided to use some boxes that we were going to recycle, string and some Plastic Gold Coins. 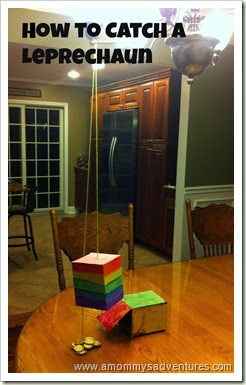 Emily and Juliette painted the boxes using rainbow colors in hopes of attracting the Leprechaun.  Then Daddy helped them rig up a pulley system over the chandelier with some string that was attached to gold coins.  When The Leprechaun picked up the gold coins we hoped the box would fall on top of him and trap him. 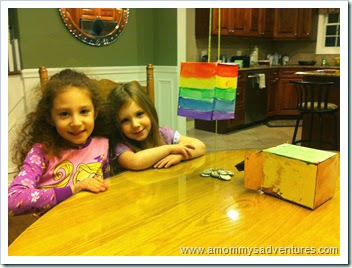 The girls were all ready for bed and so excited  to see if the trap worked. 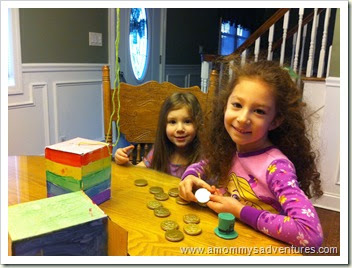 We didn’t catch the Leprechaun, but he did leave us some chocolate coins and in his haste to escape he left his hat behind, which made the girls really happy.  The trickster also turned our milk green and the water in the potty green too.

Hopefully we have better luck catching that tricky leprechaun next year!!