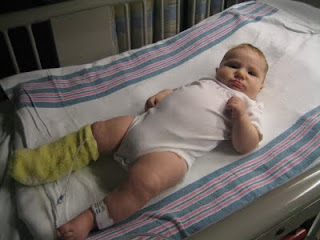 Juliette had a 104 degree temperature and the Dr's couldn't figure out where it was coming from. We finally found out that she had a really bad Kidney Infection. I spent the next 5 days in the hospital with her waiting for her temperature to come down. She will still need more tests to find out what caused the infection in the first place, they think it might be a result of reflux.
The radiologist originally saw a blockage in the kidney that he said was a congenital defect, after the third ultrasound they did not see it anymore and he had no explanation as to where it went. All I could do was thank God!!
As I was sitting in the hospital waiting it put so many things into perspective for me. I am blessed with so many things in my life that I take for granted. I realized I would trade all the material things I had at that moment just for Juliette to be well again. I am so grateful for all that God has blessed me with and plan on enjoying every moment that I have together with them.

We are so glad you are home!!!

I'm so happy to hear that your little angel is okay! I know that had to be so hard on you! Thank the Lord the blockage went away on it's own!

i'm so sorry! hoping that they will give you concrete answers soon and she will be well on the road to recovery.

I had a feeling something was wrong when I hadn't seen you post for over a week. I was praying that everything was alright with you and your family. So glad that it wasn't what they originally thought. Hope she is feeling all better soon!

How scary. I am glad she is doing better.

I am so sorry you had to go through all of that! But so happy your home and everythings going good. I will be praying for Juliette.

I'm so sorry you had such a scare! I'm glad to hear you're all home now and that she is doing so much better.

I too had wondered what was going on. We have been praying for you all this week. I am glad to hear that your baby is home. We will continue to kept your family in prayers. God bless.

I am glad to hear that your little one is doing much better! I will keep your family in my prayers!

Thank you everyone for such kind thoughts and prayers!

I am so sorry you had to go through this, Especially baby Juliette. Your family is in my prayers.

Oh Michelle, how terrifying this must have been for you. And poor, sweet little Juliette! I'm so glad she is doing better, we'll keep you in our prayers too! Take care!

I'm so happy that you are home and things are getting better for Juliette, and the rest of you! You are in our prayers.

I am so happy to hear that you and Juliette are home with the rest of your family. Praying that the doctors will be able to give you answers as to the cause of the infection.

You and your family are in our prayers and thoughts.

God Bless You! It is so hard to hear about little ones suffering. Hope she feels better soon.

Oh how very scary! I"m so glad to hear she is doing much better. I'm routinely amazed at what God can do.

I'm so thankful that she is doing better. Your family is in my prayers.

Michelle, It is so heartbreaking to see them sick and scary to see them hooked up to wires. My son had a high temp at 10 days so into the hospital for tests, medicine and procedures. They diagnosed a UTI and likely kidney infection too. No reflux thankfully and we never had a repeat incident. I'm so happy to hear your little one is cleared of her infection and no reflux!

Oh, that is so sad. I'm glad she's okay though and I hope they figure out what caused it so it doesn't happen again.

I was wondering what happened to you. I am sorry about the ordeal that you went through, and I so hope that there will be no repeat ever again. (((Hugs))), and I hope Juliette will be back to normal quickly.

Oh thank goodness sweet Juliette is ok! I know exactly how you felt, sitting there, waiting, and just hoping and praying that everything would be fine. (One of my kiddos was born w/a congenital heart defect.) I hope that her docs will be able to pinpoint the cause of her infection, and be able to treat her so it doesn't come back. Keeping your family in my prayers!!

Am so glad that Juliette is ok! Praise God! He is awesome!

I'm sorry to hear about Juliette's illness but I am so grateful that she is OK. I'll keep her in my prayers.

I am so glad that everything is OK. When my daughter was 2 mos old she got a kidney infection as well. We were all so miserable in the hospital. I have a similar pic of her as well where her arm is all strapped up to keep her from pulling at the IV. Thank God everything is okay!

When I didn't see any new posts from you, I wondered if everyone was ok. I'm glad she is healing. Take care and stay well, Juliette!

What a praise that things are getting better. We'd been worried for you - glad to know how to pray now.

Poor little thing! My thoughts are with you.

Your sweet baby will be in my thoughts and prayers.

How scary! I'm so happy she is doing better! I hope you can get some answers soon about why it happened.

My thoughts are with you! I hope she has a very speedy recovery and you guys can get to the source of it. I'm glad to hear she is on the mend! Poor little angel!

Oh my gosh!! You and your sweet ones are in our thoughts and prayers.