Did you know that today was National Doughnut Day???  Well after seeing an add for a free doughnut (with the purchase of a drink) from Dunkin Donuts I thought I would check it out and yes today is National Doughnut Day!  According to Wikipedia  National Donut Day began as a fundraiser for the Salvation Army in 1938.  It’s held every year on the first Friday of June, in honor of the female volunteers of World War I who served donuts to soldiers behind the front lines. 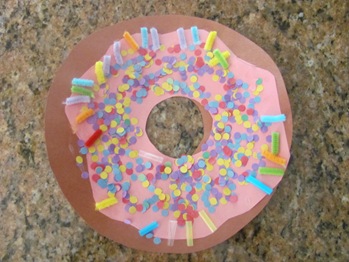 To celebrate we made our own Construction Paper Strawberry Glazed Doughnuts with Sprinkles during Art Group.

I cut out a brown doughnut shape for each of the girls and then the older girls cut out their own strawberry icing to glue on top of the doughnut. 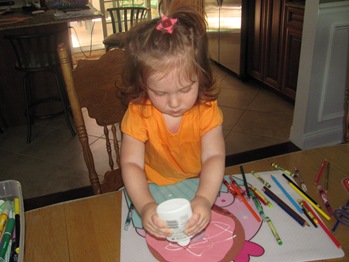 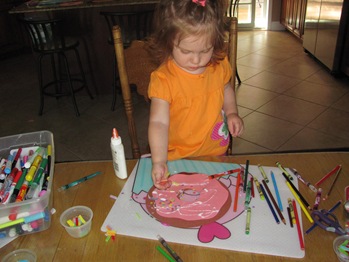 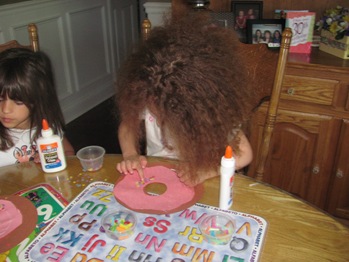 Then they added their sprinkles!!

They had lots of different types of sprinkles to choose from.  They could draw them on with marker, or glue on cut of straws, pipe cleaners or hole punched circles. 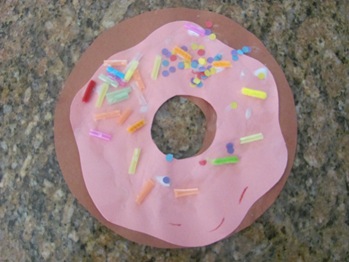 Here is Juliette’s Finished Doughnut.  Both the older girls (4) and younger girls (18 – 22 months) had a great time working on this project.

This is really cute!

Very cute - but I hope you gave them at least one real doughnut to eat :)

That is so darling! I love the pink doughnut with sprinkles!

so cute! I ahd wanted to get in a doughnut craft but the day got away from me! :) I missed Ice cream Day too! :( Such fun days that kids would get a kick out of!